There are a lot of EV sales forecast upgrades going through at the moment. In June Bloomberg New Energy Finance (BNEF) raised its 2025E global EV sales target by 65% and its 2035E forecast by 23%. You haven’t been able to turn around in the last few weeks without tripping over an investment bank EV sales forecast upgrade as it finally percolates through to autos analysts that the EV event is real and that it’s not going away! 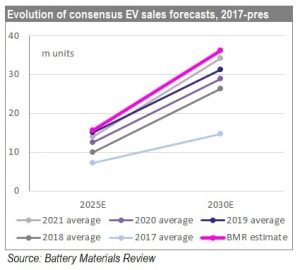 I recently read a really good article on the BBC website “Why electric cars will take over sooner than you think” (Justin Rowlatt, 1 June 2021) which made a lot of arguments that I happen to agree with about why EV adoption could be faster than many analysts and commentators think.

Consensus EV forecasts for 2025E and 2030E from 2017 to present
In fact, I’ve been making similar arguments for the past few years and, despite the recent upgrades, my near-term EV sales forecasts are still materially above consensus. And I’d like to be raising them more.

I would particularly like to raise them substantially after the EU’s “Fit for 55” refresh which calls for a 55% CO2 emission reduction between 2021 and 2030 and will require a very rapid acceleration in EV adoption over the next few years. Indeed, analysis based on these targets suggest that 60% of new car sales in Europe will need to be electric by 2030E. That’s materially above what just about anybody has in their models.

But there’s a problem that’s preventing me from raising my forecasts. And it’s a big one.

In the last issue of Battery Materials Review we published an analysis of what our current forecasts for EV sales would mean for raw materials consumption, using lithium as an example. (Just to highlight – lithium is both a core component of the current preferred lithium-ion battery technology and also the expected follow up solid state battery technology).

And the analysis wasn’t pretty. Based on our data there would be a quite substantial gap between available supply and demand in 2021 if there hadn’t previously been a significant inventory build up over the past two years.

The problem is that this inventory has been almost entirely used up by now. And based on our current EV forecasts there will be a supply and demand deficit in lithium for 2022E and 2023E. While supply might (and that’s a big if) catch up for the next two years beyond that, the deficit is huge post-2026E. 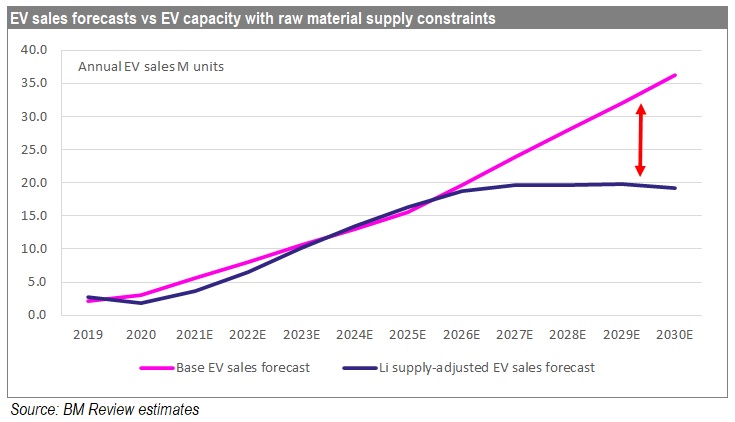 That means that our EV forecasts can’t go up from their current level and, realistically, they would have to come down.

The problem that we’re facing here is that the magnitude of growth in these markets is huge. We forecast that the size of the global lithium market will increase by seven times over the next 10 years. There is a similar issue in other key materials such as graphite and high purity manganese. The industry is adding a lot of capacity. But not enough to get ahead of these structural changes in demand.

And that’s kind of where the issue emerges with strategy. Because the auto companies have announced huge investments in EV factories and battery factories. I recently read an analysis which suggests that there are 30 battery Gigafactory projects under way in Europe. BNEF’s battery capacity forecast data suggests that on average 327GWh per annum of battery capacity is expected to be built globally over each of the next five years. 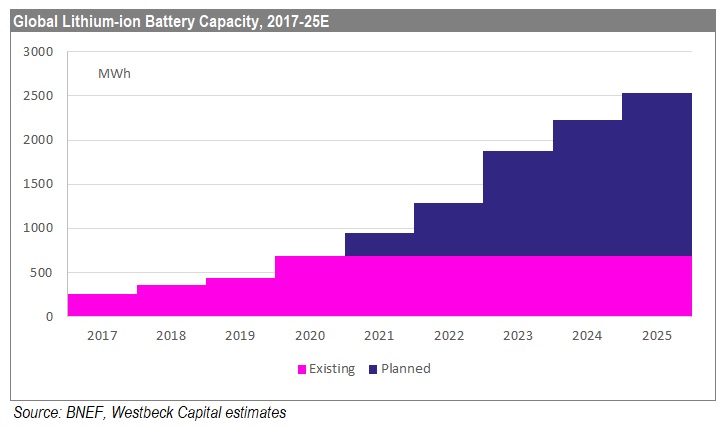 We calculate that US$118bn has been invested in EVs over the past three years, and US$60bn in batteries. It’s good to see Auto OEMs like Volkswagen and GM backward integrating and building their own battery factories.

But the issue is they’re not going far enough back along the supply chain.

It takes two to three years to build and optimise a battery factory or an EV plant. 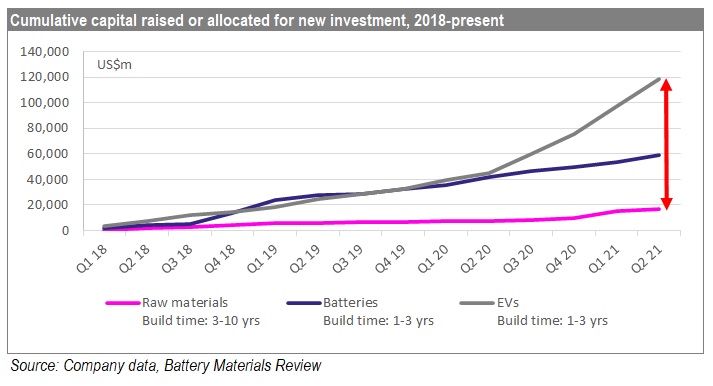 There has been a huge under-investment in raw materials capacity over an extended period. Activity has picked up this year, but it’s still lagging. We calculated in our analysis last month that we need to see seven projects the size of the largest lithium operations in the world being funded within the next 18 months, and then two more every year after that. We are miles away from that.

The bottom line is that unless projects start getting funded very soon, there is going to be an extended and substantial market deficit.

And what happens in a market deficit? Raw material prices rise. And they carry on rising. The 100% that lithium prices have risen in the past 12 months is nothing. Last year we conducted an analysis of pricing behaviour in previous secular demand events, and we concluded that raw materials prices could rise between four and six times from trough levels in an extremely undersupplied market.

But battery prices are going to fall aren’t they?

The Chinese market to some extent has led the way, with the Wuling HongGuang mini EV which has wiped the floor with the Tesla Model 3 over the past 6 months since its launch. In fact, you can see its impact on the chart below. This model has traded in range (and battery size) for cost. While such a strategy may very well work in Asia and Europe where average trip distances are shorter, I can’t see it working in the US and other regions with longer distances between settlements. 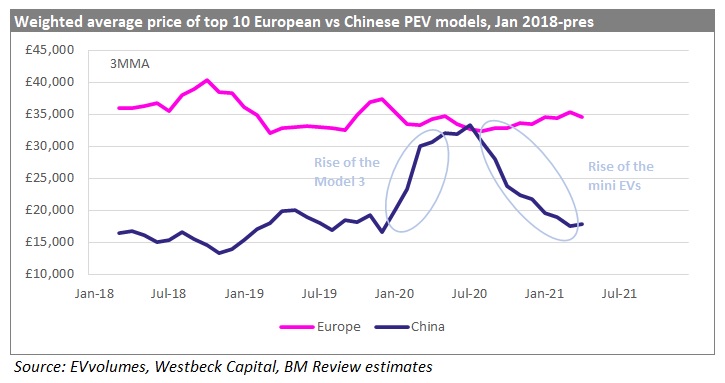 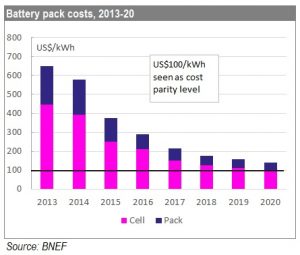 There’s no doubting that there have been huge improvements in EV battery chemistries and prices in recent years. The famous BNEF battery pricing chart shows that. But the improvement in prices in the past two years has been into a declining raw material price environment. What happens if raw materials prices rise, and rise materially?

I believe the solar industry can offer an example of the sort of impact that could occur in batteries and EVs. Polysilicon and solar glass prices more than doubled over a 12 month period and solar module prices rose by over 20% in the first half of 2021 as a result. That doesn’t seem like a lot, but they’d been falling for over 10 years before that. Margins in the solar sector are very thin and the increase in module prices led to a big fall in installations. 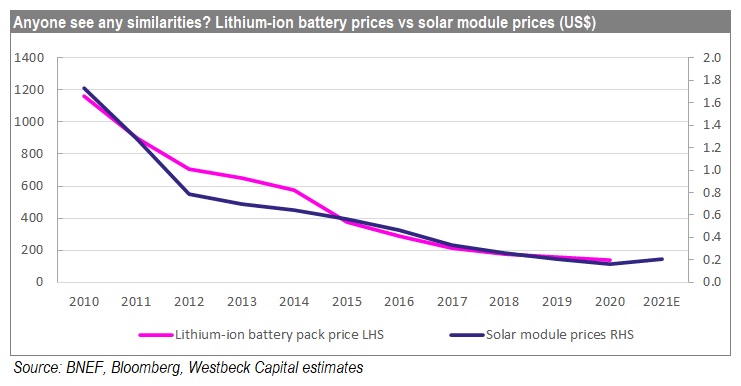 I think this is a great example of what we could see in EVs. But the supply/demand imbalance in the solar sector has already ameliorated. Module prices have started to fall.

The problem for EVs is that we believe that the imbalance in the battery raw materials sector could last for 4-5 years. How much of an impact could that have on battery prices and the economics of the EV industry? For sure it could be enough to ensure that EVs remain uneconomic for an extended period. Can OEMs weather an extended period of unprofitability after they will have pumped so much capital into the sector?

Offtake is NOT enough

There have been quite a few offtake announcements over the past 2-3 months and I’m sure a lot of OEMs are clapping themselves on the back that they’ve locked up tonnage.

The first issue is – have they actually locked up tonnage? Most of the lithium agreements are not over producing assets. They’re over development assets. The reason that they’re over development assets is that Western World automakers have spent so long messing around that all the offtake is tied up for producing assets and the expansions of those assets.

Now I’ve been a mining analyst for over 20 years and I can count on the fingers of one hand the number of development projects that came into production on time! Particularly the ones that used new technology that had never been used in the market before (like direct extraction of geothermal brines). Will those assets be in production on time? I don’t know. No-one does. But my past experience suggests that they will probably be late.

The other issue is that it’s one thing to lock up tonnage. But what price are you going to pay for material? Because no mining management team worth its salt will commit to a fixed price contract with the market as it currently is. So yes, the OEMs locked in tonnage so their battery factories can source the material to keep working. But is it going to be economic for the battery factories or the OEMs to keep working given what the price is likely to be?

And that’s why I believe that the auto industry’s approach to the battery supply chain is fatally flawed. They’ve taken too long to act. Nothing can change that. But now that they’re acting it’s not enough to lock in offtake agreements. They need to be making capital available to finance new projects at all levels of the industry.

Auto makers have got this WRONG

Auto makers are used to dealing with established industries. But this is not one.

Auto makers are used to turning round to steel producers and saying “I need more product” and having that request fulfilled. But in the steel industry it’s easy if you want to increase supply. You just call your iron ore supplier and they stick a bit more on a boat for you. But the battery raw materials industry is not like that.

For starters, as I said earlier, this industry needs to increase in size at least SEVEN times by 2030E. There is no spare capacity. All that increase needs to be built. And built soon.

In addition to that, battery raw materials are not commodities. They’re not fungible between projects. These materials are purified to the part per million level. Miners have to go through years of testing and qualification to ensure that they’re producing to the right specification. That’s why supply needs to be invested in a long time before it’s needed.

In my view the only thing likely to hold back EV sales will be battery raw material availability and hence battery costs. If the OEMs can raise money at the rate they’ve shown they can in the last three years, then they need to start throwing it at raw materials projects as soon as possible.

It doesn’t matter to the OEMs if too many projects get funded. In fact, it’s in their interest if they do. Only oversupply in battery materials will push prices back down. That’s at least five years away. And it could be longer.

OEMs need to start acting now to actually finance raw materials projects. If they don’t, there may very well not be an EV industry by the end of this decade.