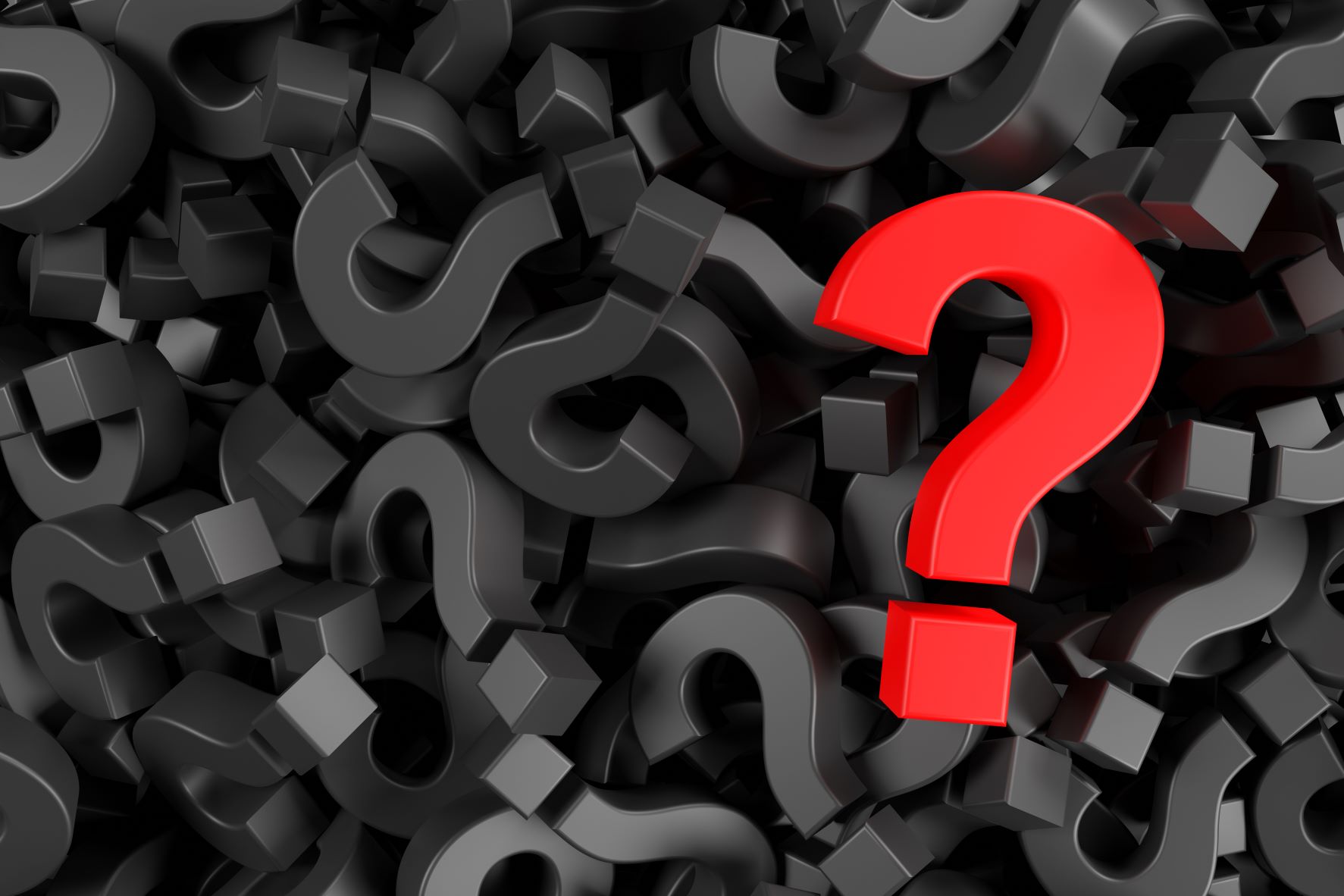 The key question on EVs that automakers are getting wrong

Well, it’s pretty much the key question – do you want your EV business to be profitable or not?

You’d think that would be a no-brainer for auto manufacturers, wouldn’t you? Certainly, as a shareholder of such companies you would have the right to assume that management teams would come up with the right answer to that question. But, unfortunately, that hasn’t been the case up to now and doesn’t look like being the case for some time to come.

Batteries are at the heart of EVs

It should be no surprise that batteries are at the heart of an electric vehicle. For many years battery prices have been heading south and there has been an assumption in certain parts of the battery and EV industries that they will continue to do so. As recently as this year BNEF published a forecast that battery pack prices could fall by 39% by 2025 from their US$137/kWh level at the end of 2020. 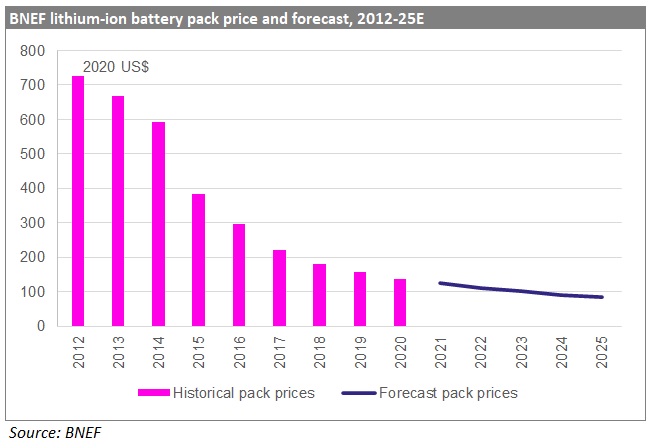 Raw materials are at the heart of batteries

But a few commentators in the industry who specialise in raw materials (including me) have been saying for several years that that is not going to occur and, in fact, we expect battery prices to increase. The reason for that is that we expect battery raw material prices to increase. The broad explanation for this is large-scale under-investment in primary extraction which is leading to a shortage of key battery raw materials, which actually began to come through this year. (I won’t labour the issue on raw materials – if you want a justification for why I think that raw materials prices will go higher, please feel free to read my previous blogs or most issues of Battery Materials Review!)

In fact, we’ve seen evidence of this in the lithium market already this year, where prices of spodumene concentrate have risen nearly six times over the past 14 months. Lithium isn’t the only raw material price that’s risen (nickel, cobalt, manganese prices are all up) but it’s certainly the raw material that’s seen the most significant rise.

And we’ve already seen the impact of higher raw material prices on battery prices. To be fair, it’s only a small impact so far, but it is a significant one. In fact, cell prices have increased for the first time in what Benchmark Minerals calls “the Gigafactory Era”.

And, in my view, cell prices are going to keep increasing. I think the supply chain is longer than many anticipate, and we haven’t really seen the impact of the substantial battery raw material price increases over the Summer. As a result, I expect that there will be significant additional cost pressure on cell producers, which they will have to pass on to their clients, OEMs.

Does that mean that battery prices will go up? Well, not necessarily immediately. Remember that EV’s use battery packs made up of multiple cells. Many of the improvements in the economics of EVs that we’ve seen over the past 2-3 years have been around the economies of scale and improved manufacturing of batteries in vehicles. I’m talking about things like bottom-up designed EVs which cut down on the amount of packaging needed for a battery, wireless management systems and other improvements. Add to this things like BYD’s blade battery and changes in chemistry to substitute LFP (which has better thermal stability than ternary chemistries) and I believe that industry average battery pack prices are likely to continue falling in 2021 and possibly into 2022 as well.

But with the outlook for battery raw material prices, I don’t see them going much further down after that and the next move beyond then will most likely be up.

What impact will higher RM prices have on EV economics?

This is a question I’ve asked myself for a number of years. The below chart is adapted from a presentation I did in early-2020 which examines what the impact on battery costs by 2025 would be if battery raw materials prices increased by three times from the prevailing level at that time. 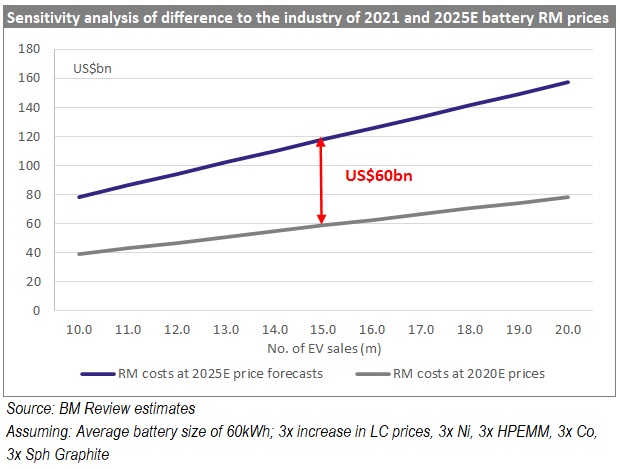 Now, as it happens, only lithium has increased by that amount, but that’s only in 18 months. We’ve got another 3-4 years for the other materials to catch up! I don’t want to be facetious here but with the level of under-investment we’re seeing in battery raw material production at this point, increases of that magnitude are very much a possibility.

From the chart you can see that at 15m units of sales (which is close to my EV sales forecast for 2025) we’re talking about an additional cost to the auto industry of US$60bn per annum from raw materials. As I’ve noted recently, I’d rather have a 2025 EV sales forecast higher than I currently have, but it is now constrained by my current raw material supply forecasts…

How can auto companies get round this issue?

Well, unfortunately I’m afraid it’s too late to avoid the bulk of the raw material shortage before 2025. Primarily because it takes between 3-8 years to build a new mine, so we’ve got pretty good visibility of the supply that’s coming into the market for key materials up until then. And, on my forecasts, there’s not enough. There’s a gap for most key materials, but it’s biggest for lithium.

Having said that, there’s plenty of time to head off bigger losses for the industry in the latter half of this decade if automakers get moving now.

After sticking their heads in the sand for some time, we’ve finally seen some automakers looking to lock up offtake agreements for raw materials this year. But, in my view, offtake agreements are not enough. They only lock in volume, not price. And, in addition, many of the offtake agreements signed by Western World automakers have been on projects that I regard as marginal at best. Projects using experimental technology that may very well not work.

In my view it’s time for automakers to get their cheque books out. There’s only one way out of this now – automakers must start to provide enough capital to the mining industry to fund the next stage of projects. And the next. And maybe even the next after that.

And maybe some of them should actually consider buying projects outright. China Inc., through Ganfeng Lithium and others, has spent the better part of 2021 buying up the next stage of global lithium projects. But Western automakers are woefully behind the times. China can’t buy assets in Australia and North America, and Western World automakers need to start taking advantage of that.

For a Western World automaker, the question should be – do I want to spend US$30/kg or more for my lithium in the spot market, or do I want to buy a lithium producer and pay only what it costs to produce (c.US$5/kg)? 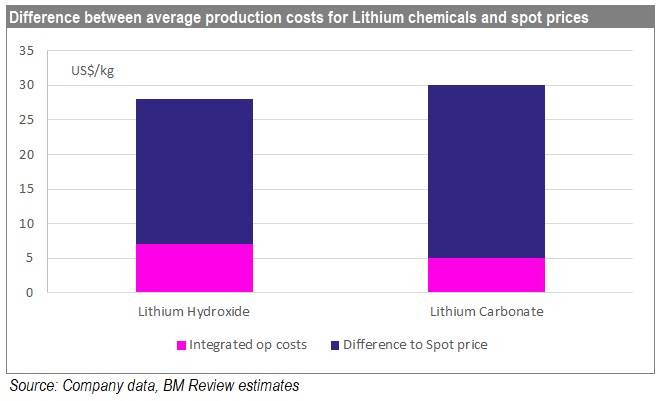 For me, that question is a no-brainer. There are producing lithium companies at the moment that have market values of less than US$7bn where an automaker could source spodumene concentrate for US$500/t rather than spot prices of US$2000/t or lithium carbonate for US$5/kg rather than spot prices of US$25/kg. While for lithium developers the situation is a little more risky, it’s not insurmountably so.

Let’s just do the maths. To make one million vehicles with a battery size of 60kWh, we would need 51Ktpa of lithium hydroxide. At cost, that would mean a bill of US$357m. At current spot market prices that would mean a bill of US$1428m. So by buying a lithium producer, an OEM could save itself over US$1bn per year in costs (and I expect that saving to rise). Even by only buying a non-integrated spodumene concentrate miner it could save itself a considerable percentage of that. At current market valuations in the equity market, that’s a pretty short payback period…

There’s been a bad case of head-in-sand-itis at automakers, particularly in the Western World, over the past few years. Given the huge amounts invested in EV and battery plants, it has the potential to be a very costly disease for shareholders.

I’ve said it before and I’m sure I’ll say it again – in my view the underinvestment in raw materials is the biggest danger to the Energy Transition. The huge increase in raw material prices has the ability to drive up battery prices substantially. EV producers will be stuck between a rock (high raw material prices) and a hard place (the consumer, who doesn’t want to double the price they pay for a vehicle, which is going to be the reality if raw material prices continue to rise). EVs are already materially more expensive than ICEs. Prices need to go down to make them attractive to the mass market, not up. 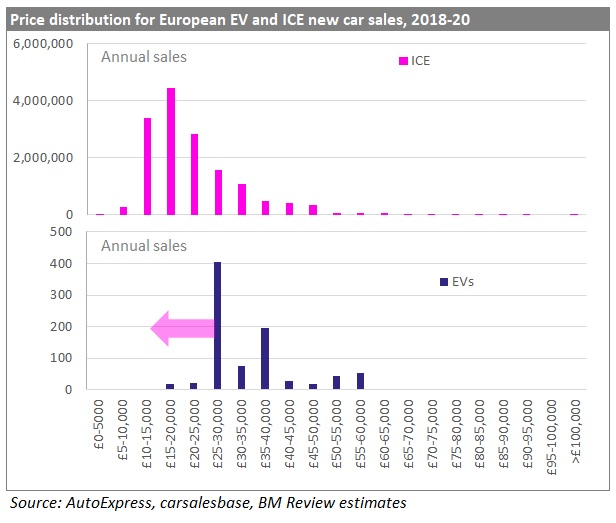 Part of the reason for the occurrence of this disease is that the people who are in charge of raw materials procurement are many levels removed from the Boards of auto companies. I don’t get the impression they actually speak. This is particularly prevalent for the European automakers, in my view.

There is a way out of this predicament for Western World automakers, but they will need to act and act quickly.

Capital has to come into the mining space and come in fast. If auto producers want to protect their margins, then they’ll need to go a level further and actually acquire mining operations or assets that are close to production. But they’ll need to do it quickly. There is a small inventory of world class assets in the industry. Once those have gone, they’re gone.

As a shareholder, I’ll be watching.