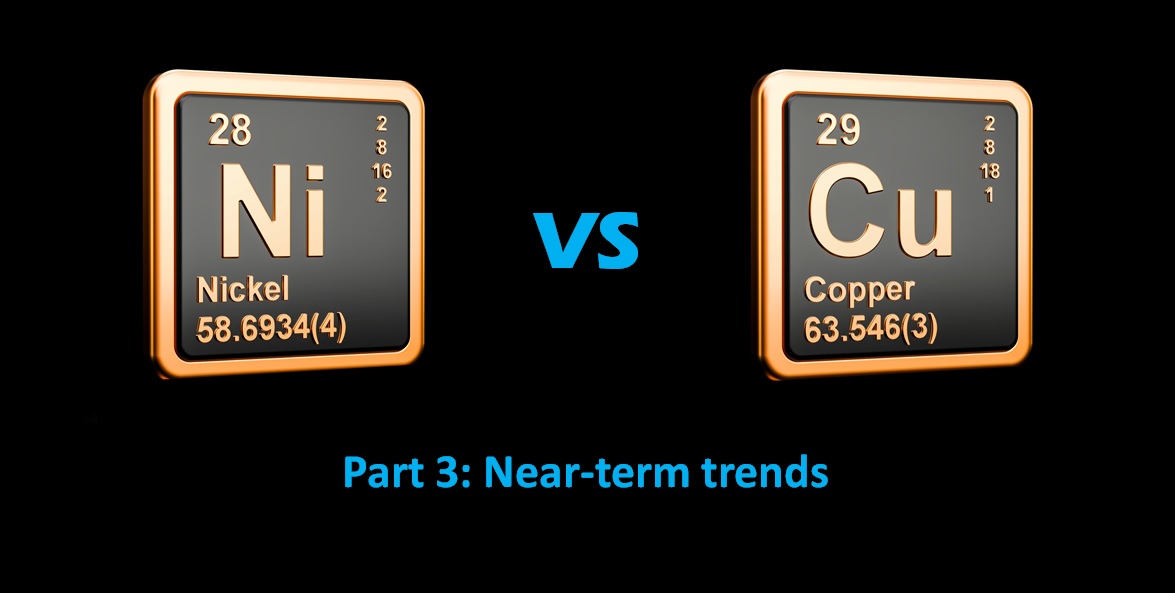 Why I prefer nickel over copper Part 3: Near-term trends

So here I am with Part 3 of this article, with nickel prices well back off their highs but still up considerably (27%) from where they were on 1 March when I first started this series. During that time copper prices are up 1%.

In Part 1 I discussed what I think analysts are getting wrong on copper, namely that they are overstating the demand outlook in the near-term. I noted that China’s property event has been the key driver of copper demand over the past 10 years and that if you back out that demand then global copper demand growth has likely been negative over that period. While there is some secular demand growth to come off the back of the Renewables infrastructure event, much of that is back-end weighted and the actual demand will not start to manifest until the mid-2020s. I also noted that many analysts were substantially overstating copper demand from EVs. 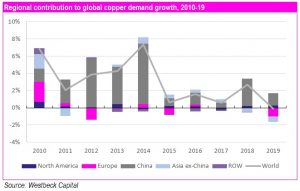 In Part 2 I talked about nickel. I flagged that over the period of 2010-19 (before Covid volatility) nickel demand growth averaged 6.7% pa and copper only 1%. While I’m happy that analysts have started to incorporate EV demand for nickel into their models, I do think that analysts are overstating supply potential, particularly in the near-term. I flagged that Indonesian HPAL projects are likely to take longer to come on than expected. We’ve had no clarification on what is likely to happen to Russian nickel, which is a key component (14% of Class 1 nickel supply), so let’s leave it out of the discussion for now. But if some was embargoed that would have a much larger impact on the nickel market than on the copper market where Russia only contributes c.5% of supply. 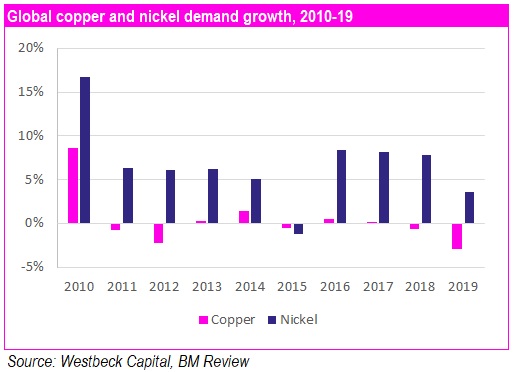 There’s just one point to make, additional to what was included in that article, and it’s on the subject of cost curve support for nickel prices. We talked about Class 1 and Class 2 nickel in part 2, with a key contributor to Class 2 nickel production being nickel pig iron. One point to make is that nickel pig iron is a massively power-intensive production method. If coal and gas prices are on the up, then electricity prices will be too and that is likely to push up the cost curve for NPI producers, giving further support to nickel prices. While this is not that relevant to battery grade nickel producers (where we currently assume relatively small-scale take up of NPI/Matte/BG production), it is important across the rest of the industry, where NPI is c.50% of global nickel production.

One of the factors supporting copper in the face of a less positive macro outlook is supply. And nowhere is that more pronounced than in the world’s largest copper mining country, Chile, where water shortages and worker unrest have led to substantial reductions in output over the last 6-7 months.

The chart below shows monthly Chilean copper production vs the 5-year average level and it is easy to see that monthly production moved below 5-year averages in July 2021 and it has not caught up. even though February is a traditionally weak month for production, Chile is still underperforming, and over the past seven months it’s produced 170Kt less than it normally would for the period. 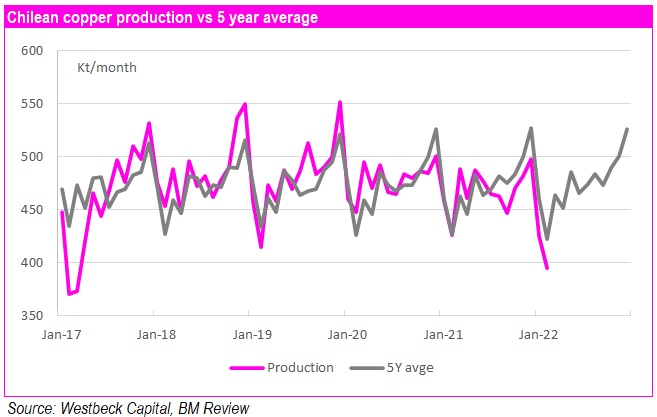 Now that would be worrying if taken on its own, particularly if you annualise that for the whole year. But the fact is, 2022 is a year where we’re likely to see a substantial acceleration in production from the DRC, which has a number of new projects coming into production. Will we see enough additional production out of the DRC to fully offset the production losses from Chile? I don’t know. But I’m pretty sure that it will offset a significant chunk of that, and moving into what at best will be an industrial production downturn and at worst a recession is likely to reduce copper demand, meaning that the loss of supply won’t be so serious.

So lets talk about my concerns for the macro environment. I’ll make no bones about it – I’m worried about the outlook for the global consumer. Why? Energy prices.

As I noted previously, China’s property market, which was already a major driver of copper demand, has been weak for the best part of a year. And it shows no material signs of re-accelerating in the near term. Chinese land sales (which lead housing starts by 3-6 months) are still falling and there’s no apparent recovery in cement apparent consumption. 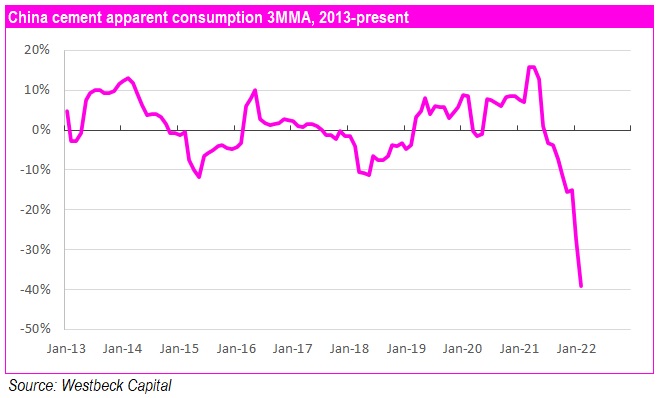 Globally no-one knows how fast the consumer will react to the increase in energy prices, but data out of the US suggests that it could be rapidly. The Chicago Fed’s CARTS retail sales indicator is a weekly series which has a great correlation with US retail sales. It’s turned down substantially over the past 2-3 weeks. While it’s still in positive territory, it doesn’t look like it will be for long. 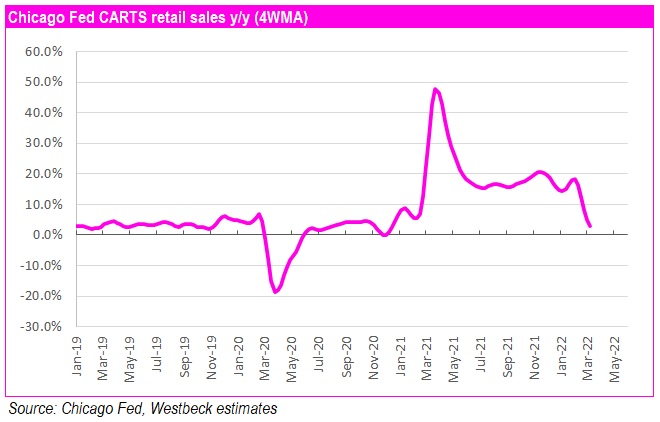 And much of the US is not even leveraged to the huge jump in power prices that other regions have seen. Certainly, the consumer in Europe and Asia will get this as a double whammy. If the Western World consumer slows, it’s likely to lead the global economy into slowdown, if not recession, in my view. Discretionary consumer spending will be first to suffer – that’s mostly consumer products, including cars. That’s not going to be great for any metal demand, but of the two I’m discussing here, copper is more exposed. 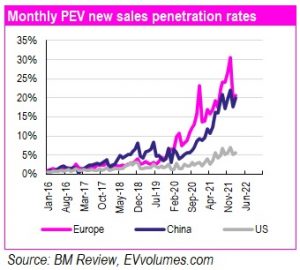 I’ve said in the previous section that I think car sales are going to be impacted by the slowdown in the global consumer. So, if that’s the case, how can I remain positive about EV sales? Well, frankly, because EV sales have outperformed ICE sales for much of the last three years and I don’t see that ending. In China and Europe, EV sales had risen to c.20% of new passenger vehicle sales by the end of 2021, and they look set to increase that rate. Only the US is lagging among the key regions.

EV sales have benefited from huge government support and subsidies, and I believe that’s likely to continue. Just last month, France’s President Macron outlined a plan to develop a state-sponsored EV leasing program to help drive EVs to become more affordable. I’ve suggested in the past that leasing and battery as a service could lower the upfront costs of EVs, making them more affordable to consumers.

I’ve also noted that the EV industry is driven more by governments than by consumers, so I don’t expect EV sales to be as elastic to prices as with many goods. Now I’m not saying this view is not a risk but, given the amount that many governments have invested in EVs, I can’t see politicians being prepared to let EVs fail. So I think we’ll see further government support for EVs, even in the midst of higher EV prices.

In fact, as I’ve stated before, I think the only thing holding EV sales back will be availability of raw materials, lithium in particular…

So, assuming I’m correct on my EV view, your question might be – why am I so much more positive on nickel than I am on copper?

• There’s probably about 40-60kg of copper in each EV. For an EV with a 60kWh ternary battery of the high nickel variety there’s probably about the same amount of nickel, 40-60kg.
• So if we’re going to sell, say 8m units of EVs this year and assuming that 60% of those will be high nickel batteries and that 75% of all EVs sold will be BEVs, then we’re looking at nickel demand for EVs (including lower nickel batteries) of about 260Kt for the year, up from 210Kt last year.
• If we do the same calculations for copper, assuming copper is used in all EVs, then we’re looking at c.400Kt of copper, up from 330Kt last year.

So it’s a bigger absolute increase in copper, you would say – 70Kt vs 50Kt for nickel. And that’s true.

But there’s a problem. Refined copper demand in 2021E was c.25Mt. Nickel demand for the same period was c.2.8Mt of which c.50% was nickel pig iron, so Class 1 nickel demand was c.1.4Mt. You can see that the copper market is something like 18 times bigger than the Class 1 nickel market, so the 70Kt really gets lost – it’s only 0.3% of the market.

But for class 1 nickel, the increased nickel demand is 4% of the market.
That’s adding a reasonable chunk to nickel demand but it’s effectively irrelevant to copper demand and that’s why the acceleration in EV sales is more important to nickel than copper.

Nickel inventories falling, copper not so much

Which then leads us into what the near-term market fundamentals look like. For as long as I’ve covered these metals, I’ve tracked exchange metals inventories to get an idea of what near-term supply/demand balances look like. LME metal inventories are published on a daily basis and Chinese and US metal inventories are published on a weekly basis. There have been a series of clear price/inventory relationships over the 20+ years that I’ve been following these markets. I look at inventories in days of consumption terms rather than absolute levels because it gives a better picture, in my view. 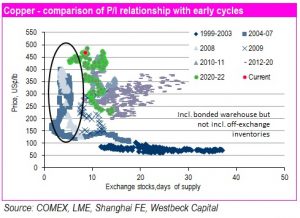 Lets start with copper. In recent weeks, copper inventories have been heading up. My inventories series differs slightly from many because I include Chinese bonded warehouse inventories, which many analysts don’t track but which I think is an important series. If you look at the long term price/inventory relationship, current copper prices are some way above those justified by this level of inventories and that makes me nervous, particularly given my comments on the global macro situation above. 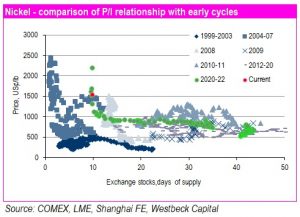 If you compare the situation for nickel, it’s very much in line with previous price/inventory relationships, albeit at the top of that range. I think somewhere around US$15/lb is a healthy nickel price given current inventories and if inventories come down this year as I expect, then there’s justification for prices to go higher. Higher power prices and the impact on nickel pig iron production would also give support for higher nickel prices and would provide a sufficiently structural change in the industry to justify a change in the price/inventory relationship, in my view.

So, just to recap all of my points from the three posts:

• Global copper demand growth, if you back out China property, has been flat to negative over the past 10 years. There are no signs that China property activity will recover materially within the next 3-4 months and, even when it does, the Government will keep a focus on speculation which will discourage rapid growth. Copper demand is strongly linked to consumer demand in the Western World, which is likely to weaken.
• Nickel demand growth has averaged 6.7% pa over the past 10 years and is much more diversified than copper.
• EV sales growth is likely to have a much more substantial impact on the nickel market than the copper market in the near-term.
• Much of copper’s demand exposure is to infrastructure development associated with the Energy Transition and that’s back end loaded to 2024-25 at the earliest.
• It looks like the world is going to go into a slowdown if not a recession. That will be negative for both copper and nickel demand growth, but the EV market could be nickel’s saviour in that situation.
• Chilean copper supply is currently constrained but there’s a lot of new supply due to come into production in DRC this year.
• I believe that Indonesian HPAL production capacity is being overstated in the near-term, so nickel supply is unlikely to grow as fast as many brokers suggest this year.
• Inventories are at similar levels for both copper and nickel in days of consumption terms, but copper prices are elevated vs the long-term price/inventory relationship whereas nickel prices are not.

So that’s why I prefer nickel (and nickel equities) to copper.