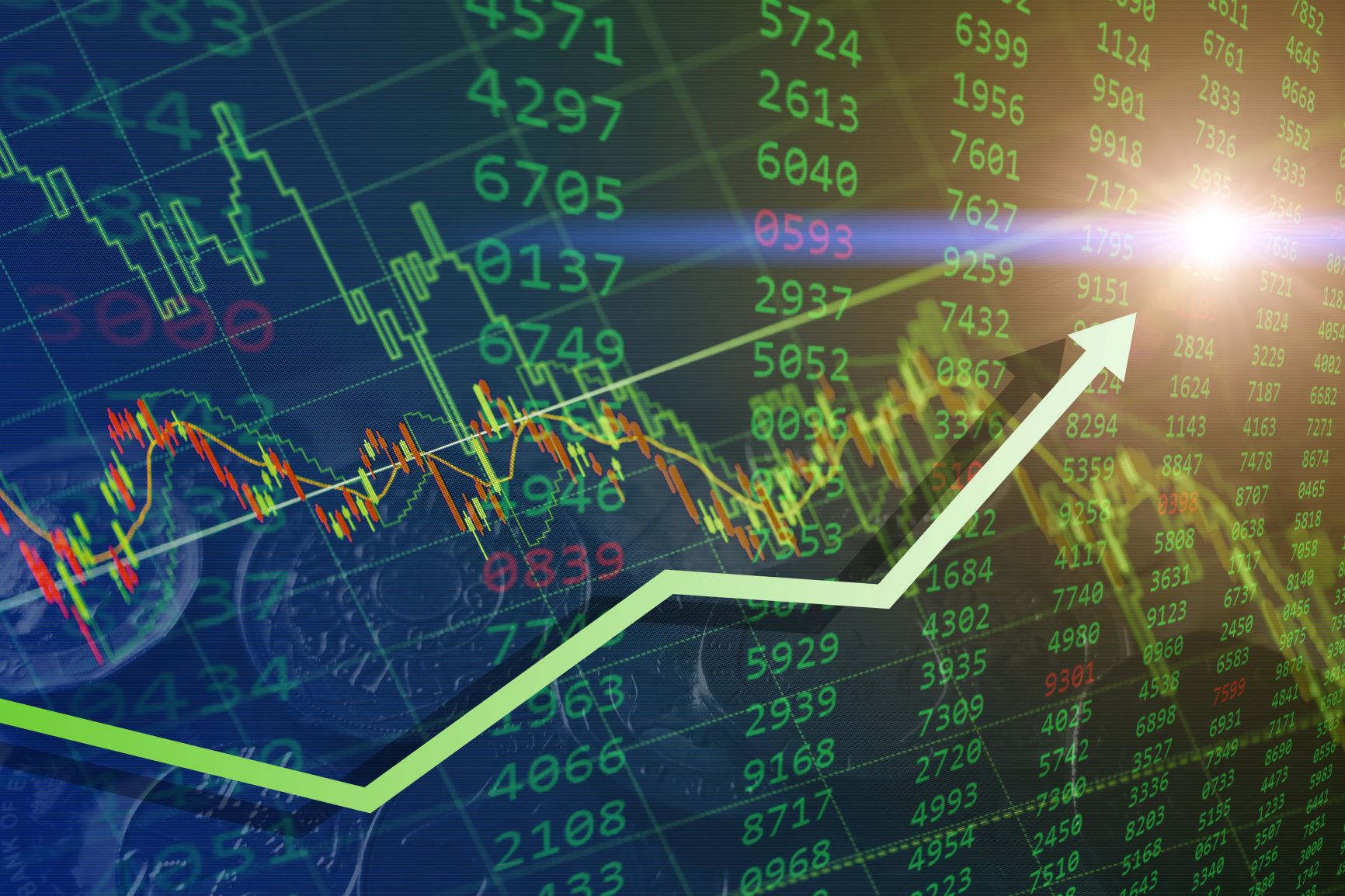 How high can the nickel price go?

I am regularly asked in interviews how high different battery material prices can go. If I had a penny for every time people asked me what my outlook for lithium prices was, I wouldn’t have to be writing this drivel!

But while lithium continues its seemingly unstoppable march higher, I’d like to talk about one of the battery raw materials which really divides opinion. Nickel.

The issues around nickel are many-faceted and bear detailed consideration. There are lots of moving parts in the nickel story and I’d like to consider some of these below.

Nickel’s use in batteries

Nickel is a key component of ternary cells (note that a battery is composed of multiple cells). These are lithium-ion cells that utilise a cathode made out of three major metals. Nickel is always one of these metals, and it may be joined by various weightings of cobalt, high purity manganese and aluminium. Tesla’s NCA (Nickel-Cobalt-Aluminium) cell was an early-mover in this space, but the focus in recent years has shifted more to NCM (Nickel-Cobalt-Manganese) formulations.

NCM cell formulations started off with equal shares (ie NCM111) but, as concerns regarding the cobalt supply chain became more prevalent, they have moved towards higher nickel and lower cobalt formulations. Today, the two most-common formulations of NCM are NCM523 and NCM811. NCM811 is the highest-growth ternary cell chemistry and we expect it to dominate market share going forward. 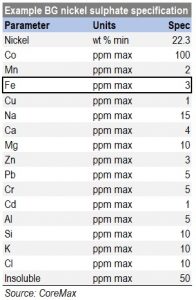 As cell chemistries have evolved to use less cobalt, the technical requirement for nickel has evolved as well. Cobalt has a specific role in cells; it helps to stabilise the layered structure of the cathode. As cobalt concentrations are reduced, the cell stability falls and, as such, the purity of the nickel required in high nickel cathode chemistries has increased substantially. This means that only the most-pure nickel intermediates are suitable for high nickel cells.

One of the most important impurities which must be kept to low levels is iron. Other metals need to be kept to low levels as well but iron is very deleterious and so most nickel sulphate specifications require iron levels to be less than ten parts per million (10ppm). But there’s a problem with this; most nickel orebodies found in nature have high concentrations of iron and nickel laterite orebodies, in particular, have extremely-high concentrations of iron which may be difficult to extract.

Because of the high technical specifications of modern lithium-ion cells, qualification has become a key part of the development process for battery material projects. In a standard nickel project of the past, only lab-scale testing was necessary to confirm the processing pathway. For battery materials projects, a 6-12 month period of qualification testing utilising large amounts of material is now required. In addition, material has to be re-qualified once a project starts production as well. A developer has to show that it can produce material to tight specifications on a consistent basis to be accepted by the battery industry. Unfortunately this is not possible for all new nickel projects, making many unsuitable for the production of battery raw materials.

The supply side of nickel and the difficulties of increasing production

There are generally two types of nickel mineralogy in orebodies, sulphide and laterite mineralogy. Sulphide deposits are normally formed by high temperature fluids, often deep within the Earth’s crust. Following a period of erosion of the rocks above those deposits, they are brought closer to the surface where they can be mined. In some cases, deep level ore deposits will be brought right to the surface where they may be weathered. Some metals form soluble compounds which may be transported away, but nickel and cobalt form insoluble ones which are concentrated, and these may be enriched in iron and aluminium. These are known as laterite deposits.

Sulphide deposits are generally easy to process utilising simple concentration and then smelting. Laterite deposits are much more difficult to process and, to produce high quality nickel, they require treatment via a process known as Pressure Acid Leaching (PAL) or High Pressure Acid Leaching (HPAL). Such a process requires heating the material up at high pressure with acid to break down the minerals. It is very power – and hence CO2 – intensive.

Nickel produced generally falls into two classifications, which are known as Class 1 and Class 2 nickel. Class 1 nickel is high purity nickel metal or intermediates, which may be produced from sulphide deposits or HPALs. Class 1 nickel has a range of uses, from stainless steel to nickel plating and batteries. Class 2 nickel is lower quality nickel (with many more impurities) which can really only be used for production of stainless steel. More than half of all nickel produced is Class 2 nickel. 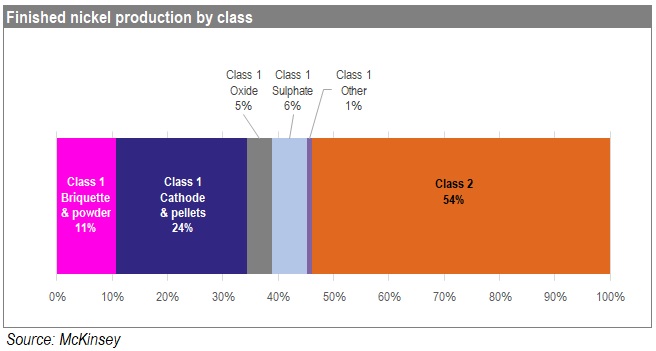 The major problem in the nickel world in recent years is that the world is running out of high-quality nickel sulphide discoveries, and the largest chunk of new nickel projects is based on laterite orebodies, which either require HPAL or are not high enough grade to produce Class 1 nickel.

When it comes to HPAL projects, the recent history has been chequered. Only a very few HPAL operations have managed to hit their targeted production levels, specifications and costs. Even if they have, it’s normally taken much longer than expected to reach these levels.

A number of HPAL nickel projects were started by Chinese miners in Indonesia in recent years. The sheer existence of these projects has depressed the nickel price, as traders speculated that the Chinese operators would be successful in these developments. Unfortunately (or fortunately for the nickel price) that doesn’t seem to be the case. One of the aspects that has led to a delay in the start-up of these projects is a volte face by the Indonesian government on waste disposal. The original plan was to dispose of tailings (waste) from these projects by pumping it offshore. In recent years that has become unacceptable from an ESG point of view and the Indonesian government has now asked HPAL project developers to find a way to dispose of those tailings onshore.

But because there’s a lot of waste associated with HPAL projects (which focus on pretty low grade orebodies), this has proven difficult to engineer and has resulted in some substantial delays to the projects. As a result, it doesn’t look like there’s going to be much production from those projects this year which, coupled with increasing demand growth from the battery sector, looks likely to leave a bit of a hole in the nickel markets.

Last year Tsingshan, a Chinese steel producer, announced that it planned to use a new technique to produce battery grade nickel sulphates by processing low grade nickel laterite ores into nickel pig iron and thence into nickel matte. This announcement led to a collapse in nickel prices as the market speculated that this could provide a new source of nickel for the industry. 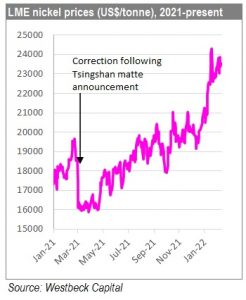 But, as I said in a blog at the time, I believe there are some major issues with this method:

• The question of whether the matte is a viable precursor for battery grade nickel sulphate. The issue is likely to be whether material derived from this process can be consistently and economically upgraded to material of sufficient purity for use in batteries. The jury is still out on that.

• This is not a clean process. Both the processes of producing nickel pig iron from laterite and then producing matte from NPI are high-temperature, power-intensive processes, effectively a double pyrometallurgical process. 88% of Indonesia’s power comes from hydrocarbon sources. In addition to that there is significant solid waste which must be disposed of (and preferably not into the sea!).
Given the increasing importance of ESG, I just can’t see the process being acceptable to Western World OEMs and, if that’s the case, then this is not going to be a mass market production process. Going forward, we estimate that c.40% of world EV demand will be Chinese and probably only 40% of these will use ternary batteries (the rest will likely use the LFP chemistry) which means that this process will only offset a relatively small amount of nickel demand.

Given the increasing importance of ESG, I just can’t see the process being acceptable to Western World OEMs and, if that’s the case, then this is not going to be a mass market production process. Going forward, c.40% of the world’s EVs are Chinese and probably only 40% of these will use ternary batteries (the rest will likely use the LFP chemistry) which means that this process will only offset a relatively small amount of nickel demand. 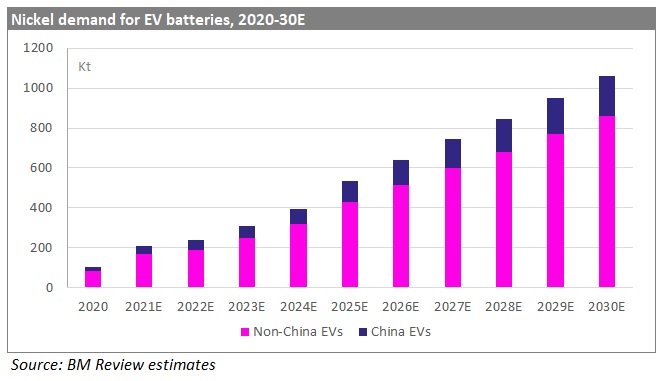 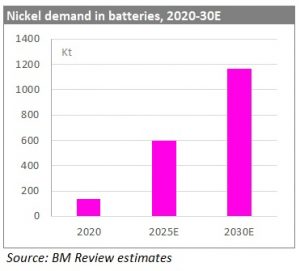 Given this increase in market share for LFP, many question whether nickel demand will continue to grow as rapidly as previously expected.
In our models we forecast that LFP batteries will reach 30% global market share by 2025E. So nickel batteries will remain the majority of the market and battery industry demand for nickel will still see a five times increase between 2021 and 2030.

As demand for nickel increases from the battery industry there is likely to be pressure on the supply chain. There are very few traditional high grade nickel sulphide projects which can be developed to fill the gap and, as we noted above, developing laterite HPAL projects brings ESG and capital cost issues.

There are a number of new technologies which are in development to try and process low grade laterite projects in a more environmentally friendly way, in particular Altilium Group’s DNi process which was discussed in the February edition of our Recharge podcast. While we are hopeful that these technologies may be successful, they are unlikely to be in commercial production until the second half of this decade at the earliest.

There is no doubt that ESG is becoming of increasing importance in the mining industry, and this is particularly so in the market for battery raw materials. OEMs are pushing miners to focus on as clean as possible production pathways and that’s going to have substantial ramifications on supply for the nickel market in particular. OEMs will prefer to access less carbon- and waste-intensive processing pathways which is likely to make sulphide orebodies more attractive than laterite and, in addition, sulphide orebodies in regions with clean power sources. This could put pressure on the supply chain in coming years. 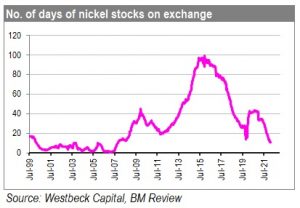 Which leaves us with where we are currently. Global exchange nickel inventories have been falling since June 2021. Chinese nickel sulphate imports rose by 800% in 2021 and refined nickel net imports were up 114% y/y. While Class 1 nickel production was down, it was down only c.70Kt in 2021 and inventories fell 158Kt during the year, which suggests that much of the fall was due to greater demand rather than less supply.

There has been a pretty clear price/inventory relationship for nickel over time. Given where current nickel inventories are, the amount that I forecast battery grade nickel demand to increase this year, the small amount that I expect Class 1 supply to recover and the delays to the Indonesian laterite projects, I believe that nickel exchange inventories could continue to fall. 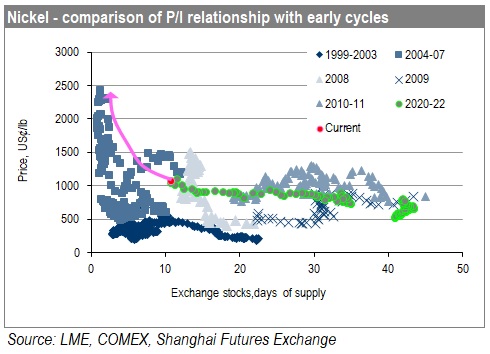 Given the current price/inventory situation, I would expect nickel metal prices to be c.50% higher than they already are. That they aren’t suggests to me that the market thinks that the HPAL projects and the Tsingshan technology are an overhang. But I don’t believe they are.

If nickel exchange inventories continue to fall then prices should move materially higher, and fast. It’s not unrealistic, in my view, that battery grade nickel prices could double from current levels.

This version has been corrected to incorporate feedback on laterite formation. I am grateful to Eric Pirard for his comments.