As Editor of Battery Materials Review and Head of Research for Westbeck Capital’s Volta Energy Transition fund, over the course of the past several years I’ve noticed a number of trends that I would suggest that many people who are outside the direct ET wouldn’t notice and perhaps those who are deep within it also are not noticing. One of the key trends that worries me is inflation.

While there is beginning to be an understanding (at least in Europe) that aspects of the energy transition are leading to higher prices, particularly in electricity, there is the view that these are transitory changes. In my view, this is wrong. We are seeing structural impacts here which will likely result in high inflation for the next decade.

This five part series discusses the impact that different aspects of decarbonisation are having and are likely to have on consumer costs. The areas I’m discussing in this blog-series are:

1. Impact of a moratorium on oil & gas exploration
2. The hidden cost of the EV roll out
3. Renewables in their current form are not the promised land
4. Cost pass through effects from materials
5. Concluding thoughts

In this part, I’m going to discuss a theme that is quite polarising and may very well result in large amounts of hate mail! The issue of renewables, the cost of their roll out and what impact that roll out will likely have on the consumer.

Part 3: The risks of the renewables roll out

If we look at the LCOE (levelized Cost of Energy) for renewable energy projects, in many cases it’s actually below that of hydrocarbon power operations. This has the potential to push down wholesale power prices.

But retail prices for electricity are actually going up. And the reason for that is that generation only accounts for c.44% of the total cost of electricity. There are other costs.

The other contributors to the retail costs of electricity are:

And herein lies the issue for renewables, because even though renewable generation costs have plummeted in recent years by 70-90% to levels which frankly could not be imagined five years ago, retail prices of electricity are increasing…

Unfortunately, such areas are normally some distance removed from areas where power is utilised. And, as a result, electricity suppliers need to invest significant amounts in transmission and distribution infrastructure to connect new renewable plants into local and national grids.

To give an example for the US, the best regions for wind power generation are in the Great Plains and Intermountain West, while for solar it is the Southwest and Southeast regions, but the demand is primarily focused on coastal markets. Hence a key amount of the focus on renewable investment will be on building out transmission networks. And unfortunately  this is not recognised in the economics of power generation. 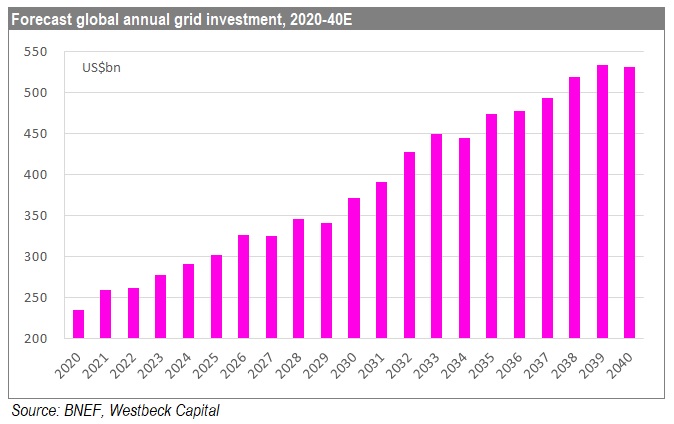 A report by BNEF (Power Grid Long-Term Outlook 2021, 23 February 2021) concludes that at least US$14tn needs to be invested on power grids worldwide by 2050 to support the development of an evolved power system. That means over US$600bn per year by 2050, nearly three-times the level of investment today.

Another of the key features of the rise of renewables, which is not well-appreciated by the market, is the degree of decentralisation that will take place. Renewables plants are smaller than most existing power plants. Which means that lots need to be built in many places to replace the big hydrocarbon power plants that need to be decommissioned. 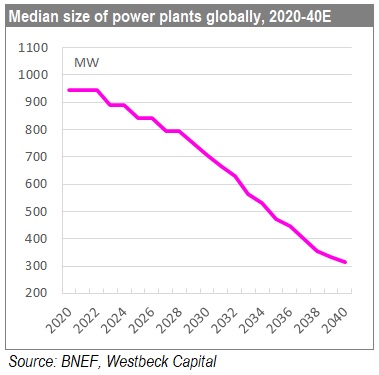 This substantial change will require a significant increase in grid investment because three times the amount of interconnectors will be needed for the same amount of power, and potentially over longer distances as well.

BNEF estimates that the installed length of distribution grids will grow by 71%, and transmission by 75%, over the next 30 years.
This is one of the key drivers of higher infrastructure costs associated with renewable energy.

In industry parlance, renewable energy is known as VRE or Variable Renewable Energy. The key is in the name. Because these are not constant or baseline sources of power. Renewable energy is beholden to sunshine or wind and, if you don’t get that, then you need to fill in the power that you’d normally get from your renewables generator with another power source. The charts below highlight how variable renewable energy can be both within one day and on a monthly basis.

And therein lies a problem. A study by the US’s National Renewable Energy Lab concluded that a large grid system with up to 30% VRE can operate with minimal system disruption. But above that, all bets are off.

What that means in actual language is that above 30% VRE in the grid, ancillary costs to maintain grid stability and reliability rise. As can be seen in the charts above, when wind and solar contribution is low, more power is needed from gas and coal to fill the gaps. Starting and stopping gas-fired power stations is much more expensive than running them constantly and coal-fired stations are an order of magnitude more expensive (and I won’t even talk about the effects of the underinvestment in hydrocarbon exploration that I discussed in the first part of this series). This then is the impact of the lack of consistency of renewable energy production.

One of the oft-touted solutions for the issues of reliability and variability in a grid which is dependent on renewable energy is storage. Storage in this context could be pumped hydro, hydrogen or batteries. All of these have been touted or used as solutions for the variability of renewable generation sources. These are widely different solutions but they have one key thing in common. They’re all capital-intensive!

The current generation of lithium-ion batteries used for stationary storage are short duration solutions. They are primarily oriented at frequency regulation and short-term resilience. They can kick in within milliseconds and ensure that any short-term outages are dealt with, which is certainly useful for keeping power grids working.

With long duration energy storage one can store the power of a solar farm in a vanadium redox flow battery (VRFB) during the day and bleed it into the grid overnight, meaning that solar power could be used as a baseline power source. One could utilise some of the power from a wind farm to manufacture hydrogen which can then be utilised to fill in on the power grid when the wind is less strong several days later. 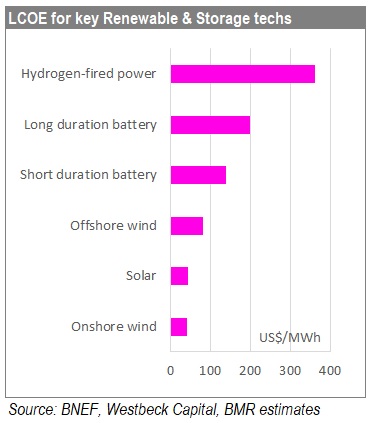 The higher LCOE for long duration batteries is primarily because they’re not yet manufactured at the same scale as lithium-ion batteries. They haven’t had what many commentators call a “Megafactory moment”. Once they do begin to be manufactured at a higher scale, it’s likely that their cost will start to fall considerably. That could be a key moment for the efficacy of renewable power.

However, whether that moment comes next year or next decade, the fact is still that the capital intensity of energy storage is currently significant and absorbing these costs is leading to higher retail power prices (even backing out the impacts of higher gas and coal prices).

Indeed, it’s difficult to get away from the fact that the significant capital investment in generation, transmission, distribution and storage that’s going to be necessary for the Green Revolution is likely to lead to retail power prices increasing over the next 5-10 years before they start to decrease. I strongly believe that this risk is not fully understood by either consumers of governments.