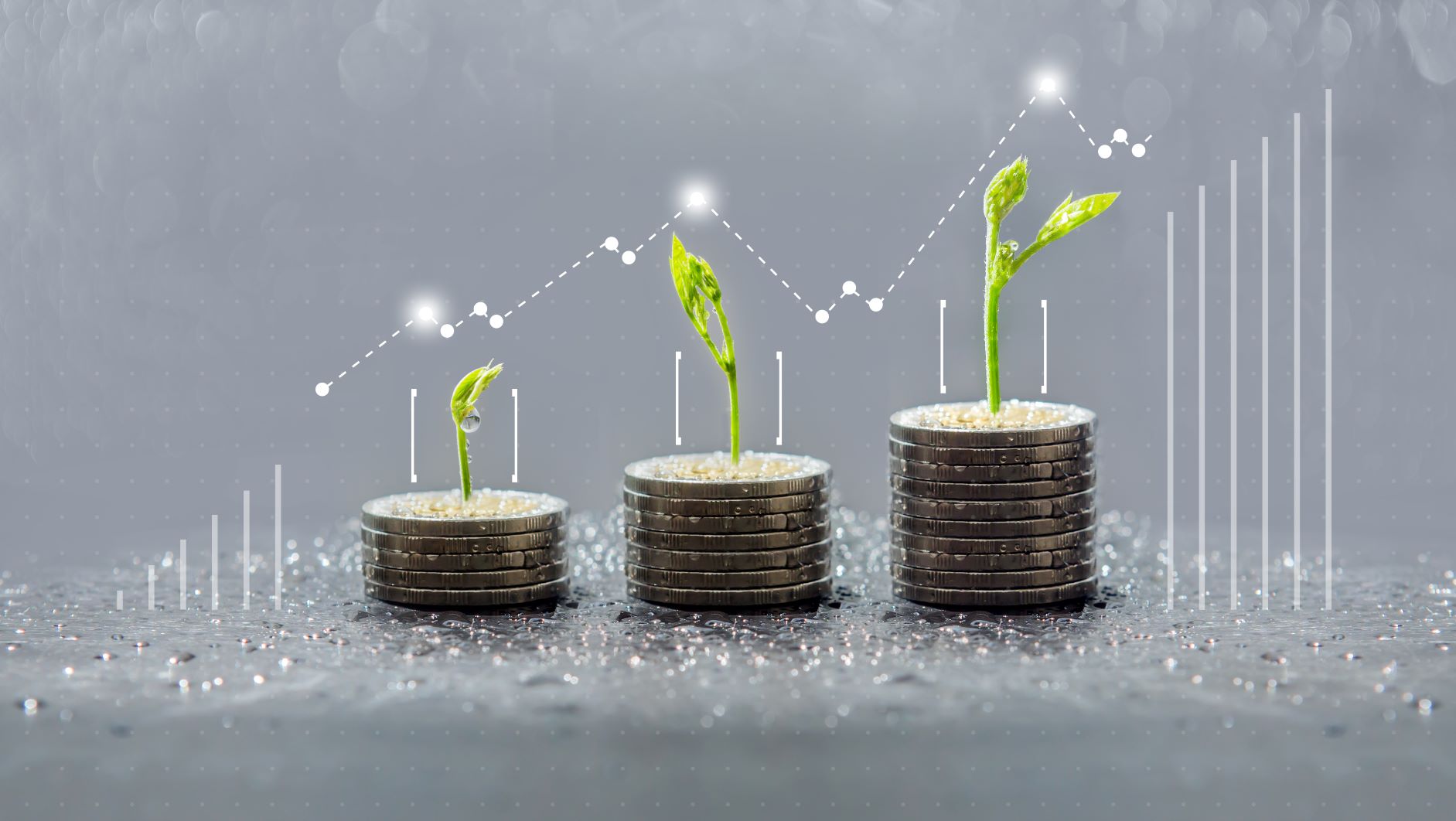 We hear a lot in the Press and from politicians and activists at the moment about the Energy Transition and about how it is vital to our futures. I work on the fringe of the Energy Transition through my work as editor of Battery Materials Review and as Head of Research for Westbeck Capital’s Volta Energy Transition fund. Over the course of the past several years I’ve noticed a number of trends that I would suggest that many people who are outside the direct Energy Transition wouldn’t notice and perhaps those who are deep within it are also not noticing. One of the key trends that worries me is inflation.

Why is inflation a concern? Well, in small amounts, it’s not. Inflation basically means the rate of change in prices of a range of goods. In basic economics a reasonable rate of inflation means that a country’s economy is ticking over very nicely thank you very much, and there’s broad-scale demand for goods. Where inflation gets to be a problem is when price increases go too high. High inflation can lead to slowing economies and high unemployment (which is then a double whammy for the consumer). When inflation in a country is a result of what’s going on in a country’s economy then it’s broadly controllable. But when inflation is caused by external factors it becomes less easy to control for a country’s government and central bank. Stagflation, when inflation is high and economic growth is low, is one of every central banker’s worst nightmares (the other being deflation, but we won’t go into that).

We’ve been seeing inflationary impacts this year through a number of sectors. The Fed has described the effects as “transitory” due to Covid impacts and perhaps the inflation that we’re seeing now is “transitory”, but I see a number of drivers emerging of long-run consumer and producer price inflation and I believe that the Energy Transition is going to be the catalyst for a high inflation decade.

In this five-part Blog, I’m going to discuss the key issues as I see them. This is not intended to “bag” the Energy Transition. It’s intended as a discussion piece and perhaps a forewarning that the easiest answers aren’t necessarily the best ones. We have the instruments to head off what could be an extended, economically-destructive period of high inflation, but it will require politicians, activists and industry to be singing off the same hymn sheet to do so. At the moment we’re not seeing that.

The areas I want to discuss in this blog-series are:

A few weeks ago I was watching TV and the UK Green Party MP Caroline Lucas was on. I was interested to hear what she had to say, especially as I got the impression she’d been brought on with the sole expectation of her castigating the UK’s COP26 Minister Alok Sharma, who was in hot water for jetting all over the world. Many environmentalists, I assume the ones that inhabit ivory towers and don’t come into the real world very often, were angry about this. Ms Lucas, surprisingly, wasn’t prepared to castigate Mr Sharma for this. She argued, with a pretty strong dose of realism, that Zoom only goes so far and that persuading recalcitrant governments to increase GHG reduction targets was most effective in person.

So kudos to her. But one other thing she said did stick in my craw. She argued, quite stridently, that no more money – none – full stop – should ever be spent on oil and gas exploration. She talked about how decarbonisation was key and that it was the future. She talked about having a joined-up strategy for decarbonisation and how it was necessary to build out supply chains. While I agree that, in a perfect world, decarbonisation has to be the aim of the Energy Transition, Ms Lucas’ remarks show a quite blatant lack of understanding of the real world. Read on, and I’ll explain why.

Let’s just talk about the idea of banning O&G exploration.

It’s not practical because oil and gas production from an oil or gas field is not constant. Almost as soon as you put an oil or gas field into production, that production starts to decline. There are different decline rates between different types of field; conventional and shale for instance. Conventional fields decline relatively slowly and shale fields very rapidly. The charts below illustrate this, utilising the example of the Cantarell oil field, Mexico’s largest conventional oil field, and the US Eagle Ford field, a major shale field.

O&G production only looks constant because exploration allows new discoveries to be added to old ones. If you now ban all exploration, then O&G production will start to decline, and decline rapidly.

It’s realistic to expect that if you ban all O&G exploration now then production of hydrocarbons could fall by 50-60% by the end of the decade.

And that’s a big problem. Here’s why.

So, let’s talk about a subject which is closer to my heart; electric vehicles. As I’ve discussed before in my Blog, I’ve got pretty racey forecasts for EV sales, probably towards the top of consensus, so when I say that on my numbers we will get to cumulative sales of EVs of c.203m units by 2030, you can assume that that’s a pretty high end number.

You would think, given the lifecycle of an electric vehicle is in excess of 10 years, that that’s great news for eliminating oil demand. I mean, by 2030, we must be talking about pretty major sales penetration of EVs? And indeed, I am forecasting that over 50% of global new car sales will be EVs by 2030.

But these sales penetration numbers only tell part of the story. There’s a real problem here. And that’s the existing number of ICE’s on the roads. By most estimates the global car park (ie the number of ICE vehicles in circulation) is around about one billion vehicles.

And maybe now you see the issue. Because if we’ve sold cumulatively 200m EVs by 2030 and the global car park is one billion vehicles, then we’ve only replaced 20% of the oil demand for transportation. 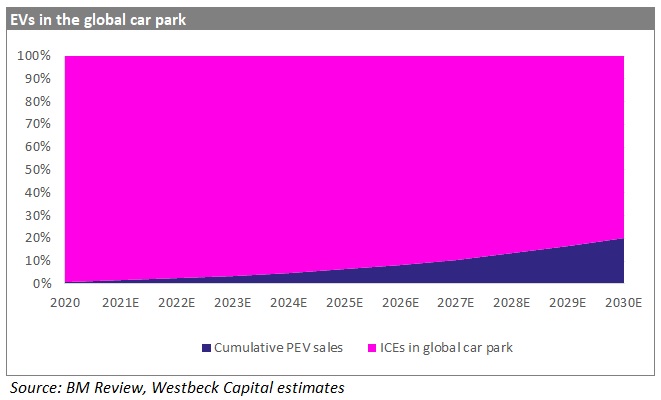 But if we stop oil exploration now, because of field decline, oil production is likely to fall by over 50% by 2030. And what does that mean in real terms? If there’s more oil demand than supply, then oil prices will go up. And if there’s structurally more demand than supply then they will go up by multiples of the current price…

Now, probably most environmentalists will turn around and say – “well we need to build more EVs”.

But the problem is – we can’t.

Why can’t we? Well, long-time readers of my Blog will know that it’s because we don’t have enough raw materials and we haven’t invested in enough new supply of those raw materials. In fact, as I’ve noted recently, my EV forecasts are likely to have to go down, not up, in the latter half of the decade because of this lack of investment in supply.

And let’s just say that environmentalists haven’t been overly supportive of the mining industry, so it’s by no means assured that we will be able to add as much battery raw materials supply as we’ll need, even to hit my current EV sales forecasts, let alone extending them.

But let’s move on from that, because even though I’m always happy to get on my soapbox there are other arguments to make!

The other key argument about oil that a lot of people forget is that road transportation does not constitute the majority of oil demand. In fact road transportation is only c.36% of oil demand (in the OECD, the average for the world may be a little different). There are other sectors out there that are major consumers of oil, the chemicals sector among them, which uses c.14% of global oil production, and non-road transportation (marine and aviation), which together contribute 11%. Demand in these sectors, and others, is not likely to fall substantially over the next 10 years, so that’s going to be a real issue. 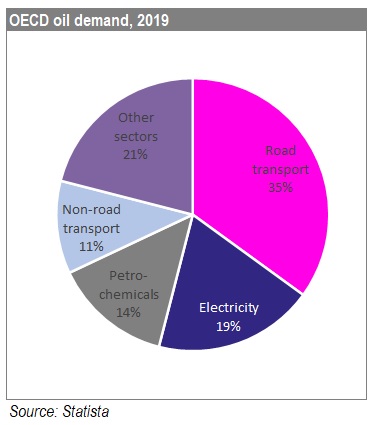 So actually the problem is worse than it appears if you only look at EVs vs ICEs. Oil demand is likely to fall less than 20% by 2030 but, if we have an immediate moratorium on exploration, supply will likely fall by as much as 60-70%. There’s no getting away from the fact that if oil becomes a scarcer resource, then it will cost more, and that will be inflationary to just about everyone, industry and consumers alike.

Cost of power on the up

Now let’s talk about another driver of household costs; namely electricity and heating. It won’t escape the attention of many in Europe that power and gas prices have increased (quite substantially in many cases) during 2021. I’m afraid that the energy transition is responsible for that increase as well.

At the end of the day, whether people use gas for heating or electricity for heating, the rise in power prices comes down to rising gas prices. Why are gas prices rising? Because the contribution of wind to renewable generation has been really low in Europe this summer. It hasn’t been a windy 2021 and, as a result, power grids have had to fill in the gap in power that they’d normally derive from wind with power from other sources. At some times of the day, that means gas (and, in some cases, even coal). This is particularly an issue because there’s very little long duration energy storage capacity in Europe and hence almost all overnight power (which cannot be sourced from solar) has to come from hydrocarbon sources… 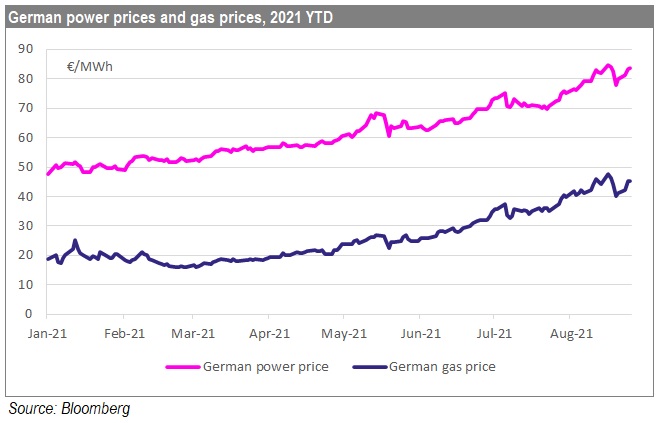 That means that demand for gas has been very strong and, because of ESG requirements curtailing investments in new capacity, supply of gas has been falling in the EU, leading Europe to increase its gas imports from Russia. But Russia’s gas fields are also suffering from under-investment, which means gas prices are likely only going in one direction. And it’s not just piped gas prices that are on their way up; LNG prices are also rising.

German gas prices are up 138% YTD and UK prices up 169% with wholesale power prices up 73% and 78% respectively. That’s quite an increase.

Hopefully wind availability will improve in the near future, but with winter demand coming and limited new supply, one has to expect gas prices to remain at elevated levels this year.

How about the future? Well, for the time being with the widespread abolition of coal-fired power plants, gas is the peaker power plant supply of choice. That means when there is a shortage of renewable power on the grid, gas steps into the breach. In the absence of quite significant investments in long duration batteries (which will take several years) then gas demand is likely to remain high yet, as we noted early, supply is dropping away. Like with oil, that’s not a great situation.

Lack of joined up thinking

So look at gas and oil. In environmentalists’ rush to decarbonise the global economy we are going to see higher supply shrinkage than the reduction in demand and hence higher transportation and energy fuel costs for probably a large part of the next decade. Could this be avoided? Yes. By simply toning down the rhetoric and not making it politically and financially unacceptable to explore for oil and gas. Because absent that, costs are going up and they could go up a lot – and it’s the man or woman on the street that’s going to absorb those costs. We need to see joined up thinking. Let’s definitely cut oil and gas investment, but not eliminate it. Because the costs of eliminating it will be more far reaching than most appreciate.

This is just one more example of how ESG’s drive to decarbonise the global economy is going to result in much higher costs for consumers. In the next blog article I’ll talk about the impact that adopting EVs is likely to have on the consumer.