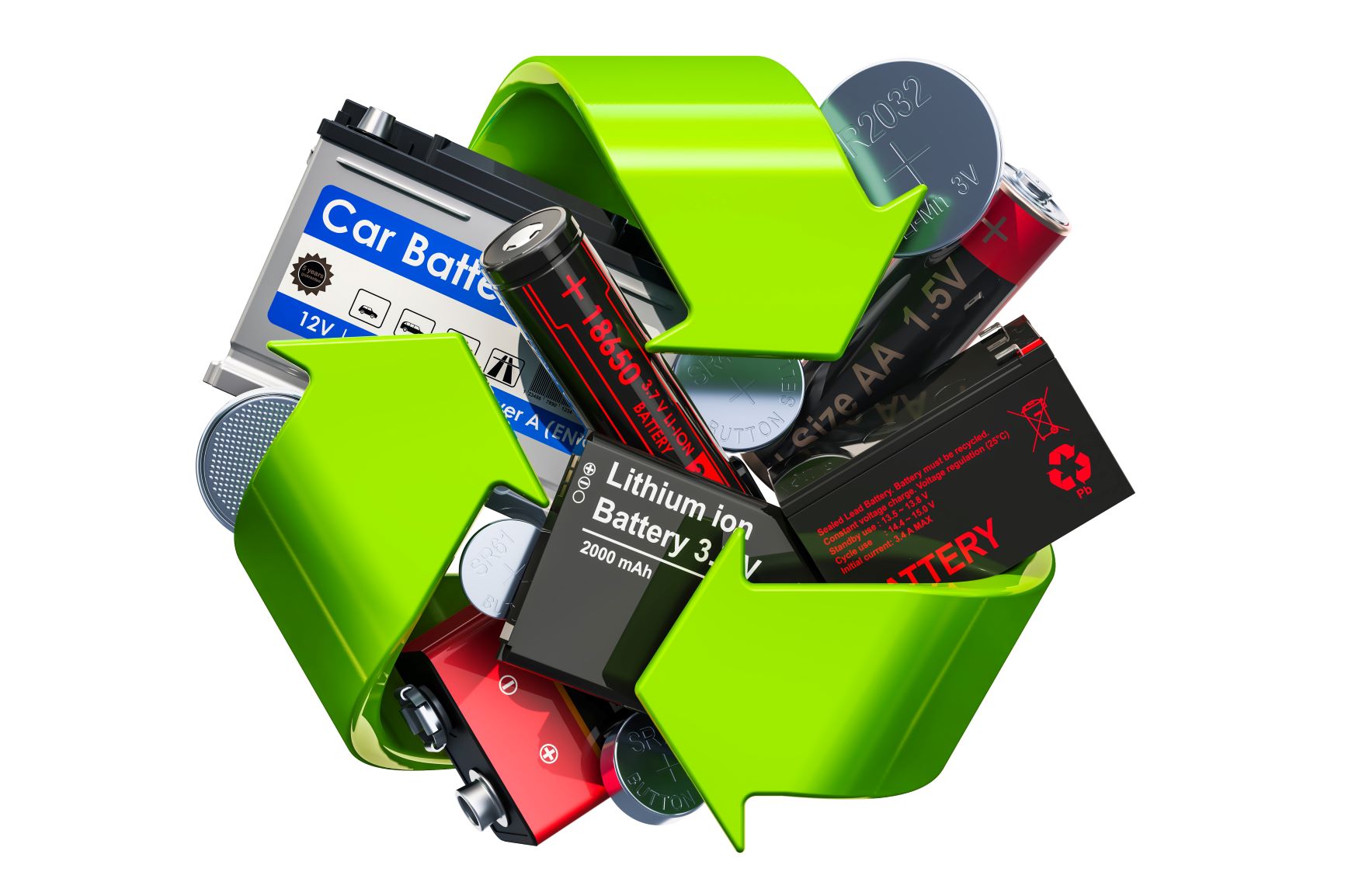 You can’t seem to turn around in the batteries sector at the moment without seeing an announcement or article on recycling. Whether its Albemarle talking about its plans on its results call, GM and LG Chem signing up to work with Li-Cycle, or Neometals talking about its recycling project in Germany, you get the idea that companies are really starting to focus on this.

There are also lots of press articles as well, but it’s noticeable that a lot of them rely on out of date information and make assumptions which can give the wrong impression.

I see a lot of articles suggesting that recycling is the answer to the impending supply crunch in battery materials. It just isn’t. At least not for the next 15-20 years.

I see other articles suggesting that there’s going to be a huge build-up of spent EV batteries in landfill sites around the world. That’s not only unlikely, it’s utterly implausible as well, in my view.

But just because recycling won’t solve the impending supply crunch that doesn’t mean that it isn’t a great business. In fact I see the recycling business growing just as fast as some of the battery raw material businesses over the next five years.

This is an existing industry, particularly in Asia and, despite what many commentators suggest, it’s profitable as well. And there’s a lot more of it going on that you’d think. A lot of articles suggest that only 5% of consumer products batteries are currently recycled. This is rubbish and a widely-discredited figure. This was taken from a report written about the EU in the early 2010s. In fact, a large proportion of consumer product battery recycling goes on in Asia, where a lot of these old consumer products (like laptops and mobile phones) end up for disposal or reconditioning, and the global consumer product lithium-ion battery recycling rate is actually closer to 20%, as the issue of the circular economy is better understood.

Because of the size and usage of consumer batteries it’s unlikely that we’ll get close to 100% consumer product battery recycling any time soon, but the recycling rate is increasing rapidly. An increasingly-important issue is safety, particularly when it comes to storage and transport of used batteries. It imposes significant costs on logistics providers to store and transport spent lithium-ion batteries because of the risk of fire. That causes further issues around battery collection.

Can consumer product batteries help provide raw material for EV batteries? Well, let’s just look at some numbers for a minute. Your average phone battery weighs about 32g and contains 1-2g of lithium. And we sell about 1.4bn smartphones per year. So, if you recycled all of those (and as we know that’s not happening) you’d produce about 4,200 tonnes of lithium. Now the average EV battery weighs about 500kg and contains about 10kg of lithium and in 2020 we sold c.3m EVs. So that would consume about 30,000 tonnes of lithium. And we expect 15m EV sales per year by 2025. Do you see the issue? 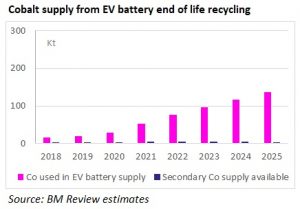 Some people might contend that the key ingredient in consumer product batteries (which have historically used the lithium cobalt oxide chemistry) is cobalt, but even if I calculate cobalt availability vs demand, it’s insignificant (c.4Kt of availability in 2020, c.120Kt of cobalt market demand on BMR estimates).

So there’s no way that consumer product batteries are going to be an effective source of raw materials for the EV space in any magnitude.

It’s not a widely-known fact, but a lot of the batteries produced for EVs never make it into cars. Why? They fail the stringent safety and viability tests that EV and battery producers have in place. Either at the cell factory or at the EV factory. Estimates vary, but for a new factory or battery formulation up to 30% of the cells produced may be faulty and, even once a factory has settled down into series production, up to 10% of cells may fail usage tests.

So, these cells need to be recycled. And there’s a cottage industry springing up of recyclers setting up alongside cell and EV factories. Why not? The growth in this market is set to be substantial.

The logistics of gathering up these cells is an order of magnitude easier than for consumer products batteries. Because they’re just in the factories. In many cases they don’t have their packaging either, so they’re much easier to recycle.

Now, can raw materials reclaimed from these batteries make a difference to supply/demand balances for raw materials? The answer is – not really.

Think about it. For starters, the rate of demand growth of electric vehicles is massive, over 50% y/y at the moment. So if you reclaim material from 20% of last year’s batteries that’s only going to supply 13% of this year’s batteries. In addition to that, there’s probably the same percentage of faulty batteries so the material reclaimed will not really make a substantial impact to supply/demand balances.

So at the end of an EV’s life, what do we do with the battery? Many scaremongering articles suggest that they’ll go to landfill but, in my view that’s daft. Why? There are two reasons: 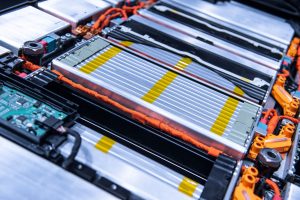 In addition, there is this phenomenon called Second Life. EV batteries have a life of 10-12 years in a vehicle but after that they still have potential to be used. Stationary energy storage applications are less demanding than EV applications and there is a school of thought that battery lives can be extended by utilising older batteries for stationary storage, potentially for another 5-10 years.

The next question, of course, is – can recycling of spent batteries make a substantial contribution to the supply/demand imbalance? Well, the answer to that is no, not now, but maybe eventually yes.

Sorry to be so vague, but let’s just think about the issue. I just said that an EV battery has a life of 10-12 years, so the batteries that are being put into cars today might come up for recycling in 10 years. They might not – they might be used for other things, but lets assume they are.

As I noted earlier, we sold c.3m EVs in 2020. But, on my forecasts, we should sell over 34m EVs in 2030. Perhaps now you see the problem? Downhill and with a following wind (assuming full collection and 100% chemical recovery), we will only have access to raw materials for less than 10% of the batteries which will need to be used in 2030. Obviously this percentage will grow over time, but given the rate of growth of EV sales, I don’t expect recycling to make a material impact to the supply shortage for battery raw materials until the latter part of the 2030s, maybe later.

So, that sounds like a tale of woe. Recycling can’t really solve the shortage of raw materials for lithium-ion batteries any time soon.

But that doesn’t mean that battery recycling isn’t an exciting and high growth business. Because it is.

Because there’s still going to have to be a substantial growth in the lithium-ion battery recycling industry over the next 10 years. We’re excited about battery materials because we see the potential for their markets to rise by 5x, 10x over the next 10 years. But actually we see the same potential for the recycling market. The charts below show the increase we expect to see for cobalt demand (in tonnes) plotted against the rise in availability for recycling that we calculate for lithium-ion batteries (in GWh). Quite significant, huh?

What will the economics of battery recycling look like?

So there’s an exciting growth business here for the plethora of companies that are springing up in the space. All that’s left to understand is what the likely economics will be of that business. Because, as we noted earlier, the recycling of EV batteries is likely to be a totally different kettle of fish to consumer products batteries. We assume that the final user of an EV battery (whether that’s the owner of the car or the owner of an ESS application in second life) will be aware that the battery contains a substantial residual value of raw materials.

That’s very different from today’s consumer product batteries, which are often provided to recyclers for free or sometimes, because of the stringent rules around storage and transport of lithium-ion batteries, recyclers may be paid to take them. 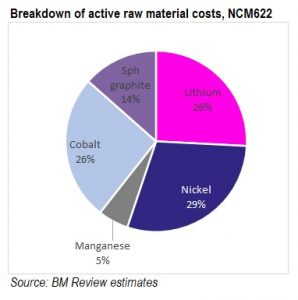 For a NCM622 battery with a 50kWh size at today’s material prices we calculate the value of the residual active materials (excluding the packaging, separator and the current collectors) would be c.US$2000. Now, maybe in a recycling process you may only be able to fully recover 90% of the active materials, but that’s still a lot of money. Recyclers will likely have to pay for the pleasure of obtaining these batteries.

And that’s for end of life. What about faulty batteries? These will be owned by the cell producer or the OEM already. Those entities will know exactly what the worth is of the materials in the battery. So, will the recycler buy the entire battery to lock in any upside from prices, or might they toll-treat the battery for a fixed price?

This question doesn’t have an answer yet. The industry is still so immature that there is the likelihood that we will see different mechanisms emerging in different regions and depending on where in the battery lifecycle the recycler chooses to focus its business.

Now, one major caveat on the end of life side. Currently, storage and recycling of spent lithium-ion batteries, particularly large ones, is complex. Because of the possibility of fire, there are specific rules for transport and storage. In some countries these batteries cannot be transported by train, in others they cannot be moved by ship. Storage also has its issues. Logistics companies must allocate specific warehouses with strong fire suppression systems and spacing between batteries. Because of this, the end of life part of the business is likely to have substantially higher logistics costs. This can be avoided in the faulty battery business because the recycling plant can be sited adjacent to the cell factory or car plant.

We don’t know how the economics of the recycling industry are likely to develop at this point in time, but building a circular economy is key for an industry that takes its environmental credentials seriously. Given the proprietary nature of the chemical processes associated with battery recycling, not everyone can do it. That suggests to us that it can still be a high-margin business akin to cathode and anode active material manufacture.